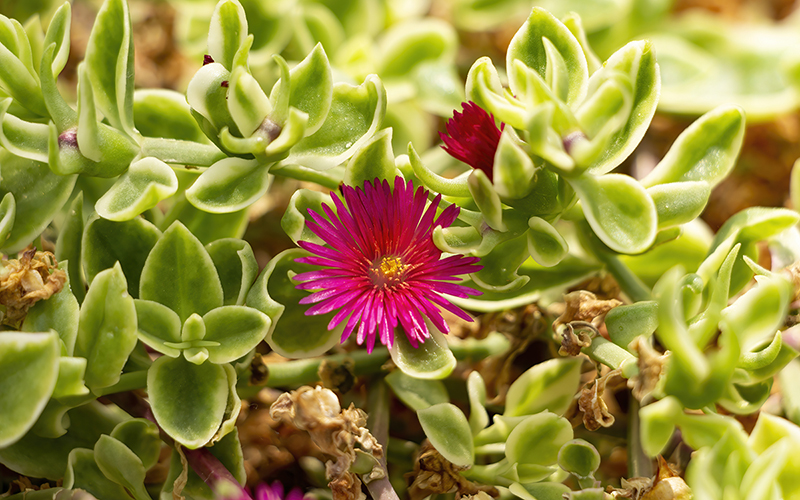 How to Climate-Proof Your Garden

Take a guided tour around the Cornell Botanic Gardens and you’ll eventually come across six unsuspecting raised beds filled with an array of flowers, fruits, and vegetables. Around the beds, posted signs provide information about climate change and the impacts that increased heat, drought, and flooding will have on common garden plants.

But, as the saying goes, seeing is believing, which is why, after a few minutes, the tour guide will lead you into a nearby plastic tunnel (pictured, below) where six identical raised beds are set up. That’s when reality begins to sink in. “You go into this high tunnel and it is noticeably warmer—uncomfortably so sometimes,” says Sonja Skelly, director of education for the gardens.

In a way, the simulated Cornell tunnel doubles as a time machine, fast-forwarding your tour group to the year 2050. That’s when scientists predict New York State will be around 4 to 6 degrees warmer. Though that might not seem like much on paper, in reality, “People can’t get out of there fast enough,” especially during the humid summers, explains Skelly. “As soon as you walk in the door, [the heat] hits you in the face.”

However, it’s at this point that (at least, if Skelly is leading a tour) the guide will remind you that this discomfort is fleeting; in just a few short minutes, you’ll be able to step back outside into the much milder temperatures of 2022. The plants before you, however, don’t enjoy the same luxury. Many are showing clear signs of heat stress, unlike their counterparts outside. One year, broccoli planted inside the tunnel grew to be lumpy and misshapen because of the higher temperatures.

Cornell’s created the Climate Change Demonstration Garden in 2014 “to use plants as the lens to help tell the story of climate change,” Skelly explains. It also doubled a way to show the public that climate change wasn’t just some obscure phenomenon happening elsewhere in the world—it will happen here, as well.

In fact, it’s already happening, and we won’t have to wait until 2050 to see the effects. Climate change “has had a huge impact on gardening,” said Missy Gable, director of the University of California Agriculture and Natural Resources (UC ANR). “My own personal experience with gardening and climate change has seriously revolved around drought.”

Meanwhile, to the East, the problem is—ironically enough—too much water. Annual precipitation has been increasing in many places across the country, leading to a higher risk of flooding in the spring. A shifting climate can also alter the distribution of both pollinators and pests in ways that are rarely in our favor, explains Nicole Rafferty, a professor of entomology at the University of California, Riverside. “Because climate dictates so much about where their suitable habitat is, once you change the climate you change where that habitat is found.”

Nevertheless, climate change doesn’t have to be the antagonist to a lush, beautiful garden. No matter where you are in the US, there are a few steps you can take to protect, adapt, and maintain your personal backyard paradise.

“If we don’t focus on creating gardens and landscapes that are resilient in the face of climate change, we’re just going to lose our plants,” warns Gable. Bottom line: We’ll also be losing the environmental and health benefits plants provide.

1. Get a handle on your region’s unique climate.

When it comes to climate, most gardeners are intimately familiar with the USDA plant hardiness zone map, which divides the country into 13 zones depending on a location’s average minimum temperature. Although it’s not perfect, it can still help you figure out which plants are most likely to survive the winter conditions in your region.

However, as temperatures rise, Heather Reynolds, a professor of biology at Indiana University, also recommends that gardeners reference the American Horticultural Society’s heat zones map, which shows how often an area might expect to see days above 86o F. (This is when plants often begin to show signs of heat stress.) Out West, Gable also refers local gardeners to the Sunset Climate Zones system. Unlike the other two zone maps, this one takes into account precipitation, wind, humidity, and the length of the growing season, creating a more precise picture of what your plants might have to deal with.

Remember, though, that these resources don’t account for how your local climate may change in the future. For that, Reynolds recommends looking up climate projections for your area. Try browsing the National Climate Assessment, or state-specific ones like California’s or Indiana’s.

“You need to think about how those changes are going to impact when you start growing things, [and] what species might be most appropriate to grow,” adds Reynolds.

2. Take control of your space.

Of course, this would all be easier if we could just control the weather. Sadly, gardeners don’t have that power… or do they? “We can control microclimates somewhat by where we place plants,” says Karrie Reid, an environmental horticulture advisor at the UC Cooperative Extension of San Joaquin County.

This is precisely why she and Gable recommend that all gardeners think carefully about how they set up their landscape. For example, are there areas in your garden that receive more shade than others? Some plants may be better there.

Shade will be an especially valuable resource during the hotter summers, which is why you should start paying special attention to any trees that dot your garden—and try to keep them alive at all costs. If you don’t have trees, “the first thing that you can do, even in the face of climate change, is to start getting some trees established and place them appropriately so that they can mature and shade your home,” says Gable. (Check out Sierra‘s simple guide to tree planting.)

“The first thing that you can do, even in the face of climate change, is to start getting some trees established and place them appropriately so that they can mature and shade your home.”

In addition to trees, “I really encourage people to have large ornamental grasses around their yard,” said Reid. Their tightly packed leaves can provide beneficial insect shelter from high wind and cold temperatures.

Even better: Opt for native plants or those that can thrive under similar environmental conditions. They will not only benefit pollinators but often require less resources, like fertilizer, in the long run.

That said, if you’re still waiting for those pollinator-friendly plants to get established, you can always build or purchase some nesting boxes and place them around your home. You can also leave out nesting material, like reeds, and let the critters do the work themselves, said Rafferty, the entomology professor. Another option is to simply leave patches of the ground free of mulch, plants, or pavement. That’s where a lot of native bees like to hang out.

Just as important as the plants you grow? The dirt you plant them in. The quality of your soil can end up determining “how healthy the plants are going to be and also how resilient they’re going to be to climate changes,” explains Reynolds.

Create a healthier soil by incorporating compost or mulch—anything that can help build up organic matter. “The more organic matter you have, the better your soil is able to drain after a heavy rainfall event, and also hold more water during a short-term drought,” said David Wolfe, a professor of horticulture at Cornell University.

Along the same lines, another thing to consider is your soil type. This is especially important in drought-prone regions where “having the right irrigation system that’s matched to your soil is critical,” says Reid. She advises that those with heavier soils should irrigate slowly, so that the water can penetrate down to the roots. In contrast, for sandy soils, “you’re going to apply water more frequently” but in much smaller amounts.

Don’t know what soil type you have? Contact your local Cooperative Extension Office. According to Reid, “They have really good resources and people to help you figure out how to take a soil sample.”

Weeds, pests, and disease have always been the stuff of every gardener’s nightmare. Unfortunately, this is just going to get worse with climate change.

But think twice before reaching for pesticides or herbicides, as these noxious formulas don’t discriminate against pollinators. They also set up a cycle of dependency, says Reid, by “creating plants that aren’t really sturdy or adapted to the environment that they’re in.”

Instead, grow a variety of plants. “The more diversity that you have, the more eggs you have in your basket to deal with different threats that might emerge,” says Reynolds. A diverse, healthy garden also increases the likelihood of attracting the pests’ natural predators, which can ultimately help control their populations.

But, if all else fails, Reid once again recommends contacting your local Cooperative Extension Office. They can help you troubleshoot disease or pest issues without the use of pesticides. They also often keep track of outbreaks happening in local areas, says Wolfe.

To Gable and many others, gardening is more than a hobby. “Gardening can be moderate exercise activity,” she says. “And then on the mental side, it activates your senses with sights, and smells, and sounds and textures.”

But gardens of all sizes help more than just the individual. They filter the air, protect the soil, and even sequester carbon dioxide. Making them climate-resilient only prolongs these numerous benefits.

And yes, even those of us with tiny rooftop garden are making a difference.

“It’s important to think about it in terms of ‘cumulative,’ reminds Reynolds. “It can have profound scaling-up effects when enough people are doing it that you actually then create a cumulative footprint of greenspace.”