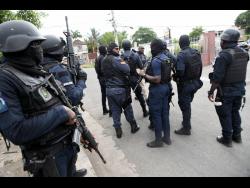 Gun terror and internal gang warfare tore through Jamaica’s old capital on Tuesday afternoon, prompting the imposition of a 24-hour curfew after at least three men were killed in related incidents in Spanish Town, St Catherine.

It is the “continuation” of a feud involving gangsters from the One Order clan, Chief Superintendent of Police Stephanie Lindsay confirmed, referring to one of the major criminal organizations operating out of the parish.

Shuttered businesses and fleeing shoppers and merchants were among the chaotic scenes as the first shots rang out in the market area.

“It was hell,” said a resident who witnessed the attack.

“I was walking towards the market when I heard gunshots and people started running around. I run and hide behind a car until it stops, then I see people lying on the road bleeding,” the resident added.

This graphic scene was the first of two incidents in which several suspected gang members were allegedly gunned down by members of a breakaway faction. Two people died, including a known member of the gang.

The gunmen then proceeded to Job Lane, close to the railway line, where they opened fire on a 19-year-old man who is now fighting for his life in hospital.

In a related shooting, police killed an alleged gang member outside a car wash at the corner of William and French streets and seized a firearm.

Residents have erected roadblocks in various communities – including Tawes Pen which was the scene of a recent quadruple murder, to prevent the gunmen from spreading their torment. Members of the Jamaica Defense Force were able to clear some of the barricades.

The pandemonium created by the armed men forced several businesses to close their doors and the inhabitants retreated to their homes.

And while the police were busy searching for the gunmen and clearing the roadblocks, it was learned that the administrative office of the court was on fire.

The fire, which broke out around 4:40 p.m., destroyed part of the roof of the building housing the court’s administrative offices and the municipal corporation’s revenue office.

Firefighters say they were able to prevent the blaze from destroying sensitive court documents as well as city records.

Three units – two from Spanish Town and one from Portmore – fought the fire.

Normal operations are expected to resume at the registry on Wednesday, one of the busiest days of the court week.