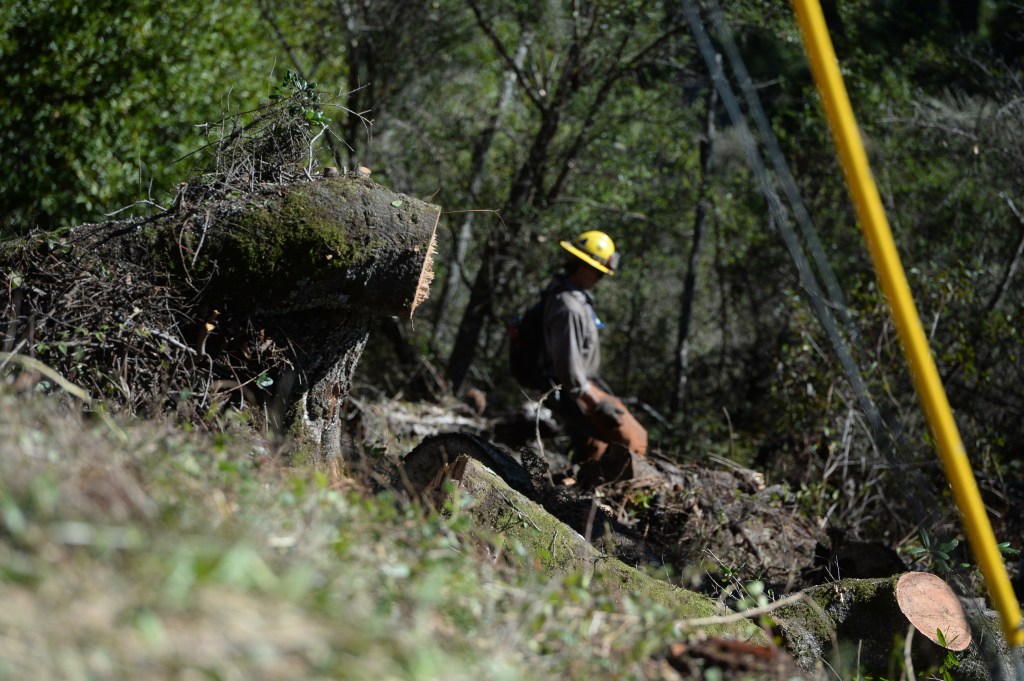 “It’s based on the rain and the weather forecast, since we’ve had so much rain here,” said Battalion Commander Todd Overshiner.

As a result, some winter season vegetation management efforts began in the last week of October and are now the primary focus of local fire departments, he said.

Captain Jordan Reeser, director of vegetation management for the Marin County Fire Department, said the release of seasonal firefighters waiting to fight wildfires in early November occurred about a month earlier than usual.

“We now have this extra manpower that we can put to work,” he said of the two teams of 14 now available to help with the fuel reduction work.

County brush clearing projects are funded by the Marin Wildfire Prevention Authority’s plot tax passed in 2020 or by CalFire grants. For this reason, said Reeser, “there is no net cost to the county” for the early transition of seasonal firefighters into field management work.

Two AmeriCorps teams have been reassigned to carry out vegetation management, said Battalion Commander Bret McTigue. They will be at Le Marin until mid-December.

This week, teams plan to increase the defensible space around homes and clear escape routes at Pacheco Valle in Novato and Inverness Ridge in West Marin. Fuel reduction efforts are also planned at Throckmorton Ridge, the San Geronimo Valley and around the Golden Gate Village in Marin City.

“Now is the time to start working on these projects, when we don’t think about it,” Dicochea said.

In San Rafael, ongoing projects were helped by the first rains.

The city has a team that goes door-to-door to advise people on defensible space work and runs a free juniper removal program using AmeriCorps workers.

Russell Albano, manager of the defensible space program, said fire crews and the city’s open space team create shady fuel cuts where large, healthy trees are kept but where “fuel scales up.” ‘to the canopy’ are deleted.

A project to clear the hillside streets to remove roadside vegetation from surfaces and edges is also expected to start.

The Tamalpais fuel cut, a 4.5 mile area bordering the edge of the National Park Service property and the Tamalpais Valley, is entering its second phase. Approximately 1.5 miles of breaks have been completed, and the next phase will be near homes along Marin Drive, Smith Road, and Lower Autumn Lane.

A second project in Mill Valley has been underway since August on 26 acres in a high severity fire zone along Hillside and Greenwood avenues. Teams remove large areas of brush, broom, Monterey pines and junipers.

“In the last 60 days, we have already completed about 50% of the work described in the work,” said Omoomy.

Reducing fuel on paved roads run by Southern Marin and Mill Valley firefighters each month aims to clear eight to 10 streets. The next project is scheduled for November 21. Southern Marin firefighters are also planning to run free wood chipping weeks starting in December.

In Sausalito, teams work to create a fuel cut along Woodward Street, removing tree branches and the French broom. Maintenance of the fuel cuts on Spring Street and Gordon Street was completed on Friday.

While prescribed and prescribed burn efforts were initially planned in parts of the county this fall, early precipitation hampered efforts, Reeser said. Burning is unlikely to occur until 2022, in late spring or early summer, when grasses are drying out.

Treating grasses is not as much of a concern as the impact of drought on large fuels, especially wood, said Reeser. Without more rain this winter, these conditions will persist, he said.

“We will definitely continue to monitor long-term drought in our forest areas… because that’s really where it comes into effect,” he said.

Residents of Marin will notice the increased efforts in their neighborhoods over the coming months, he said.

“They’re going to see a lot more work all year round – vegetation management is going to be a year round commitment,” Reeser said. “Winter gives us a lot more opportunities for many reasons… as long as the weather permits. “