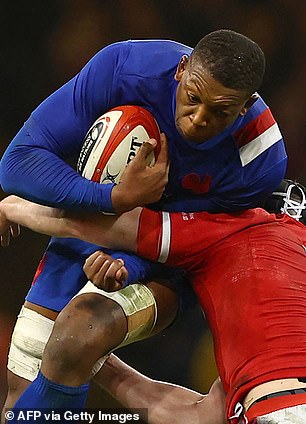 Key battles between France and Serge Betsen’s England: An intense clash awaits between exciting starlet Cameron Woki and experienced chef Maro Itoje in the final round of Six Nations matches

By Serge Betsen For the Daily Mail

England travel to Paris on Saturday to face a France side aiming for the Six Nations title and a Grand Slam.

Ahead of the match, French legend Serge Betsen picked out the key battles he thinks could be decisive.

The amount of running, rucking and tackling these guys do is unbelievable. The beauty of putting Woki in second place is his ability to move around the park.

Itoje is slightly bigger but they both bring something special. France pretty much has the edge in their lock combination.

There were very few changes to the French top five, so they became a very cohesive unit.

Marchand embodies the fight of the pack. He’s become an extremely effective counter-rucker and that’s earning the team a lot of penalties.

He and George are confident from the set piece, with great familiarity with their Toulouse and Saracen team-mates.

Top tips for being an eco-friendly camper in the UK, from foraging to reducing waste