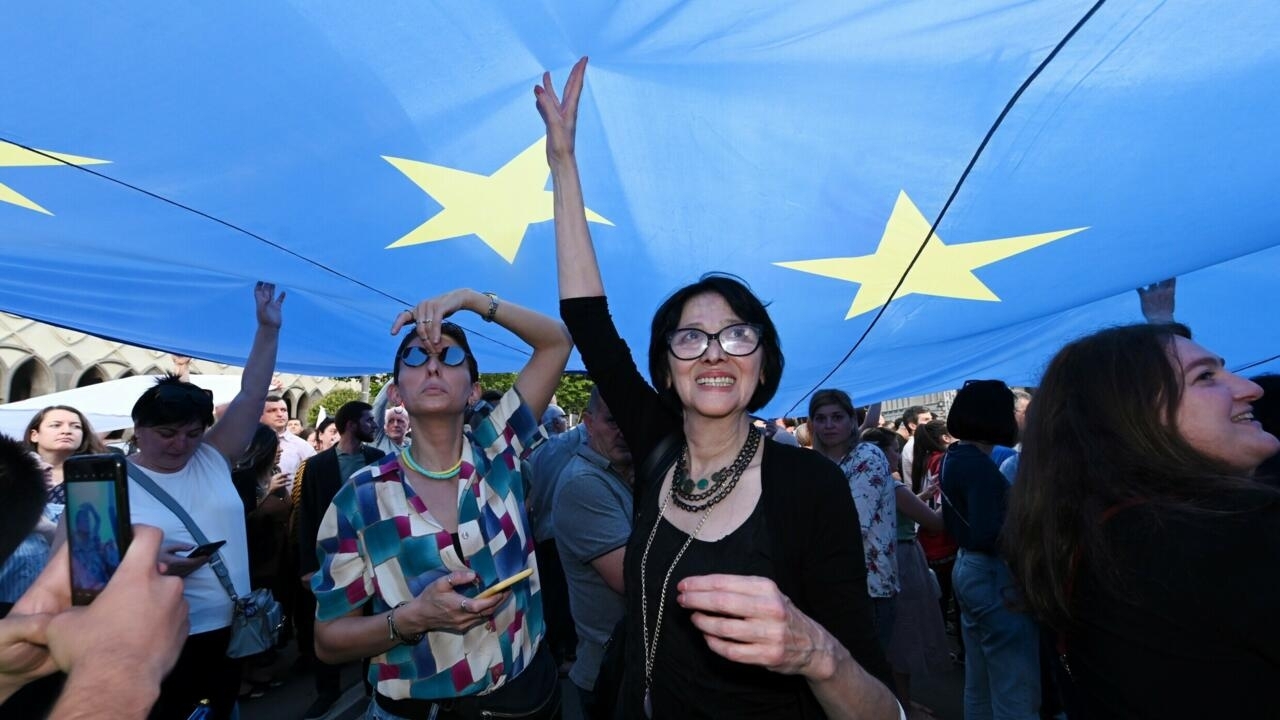 Tbilisi (AFP) – Tens of thousands of Georgians took to the streets on Monday to support the country’s bid for EU membership, days after the European Commission recommended postponing Tbilisi’s bid.

EU leaders are expected to vote by Friday on granting candidate status to Ukraine, Moldova and Georgia, all of which applied for EU membership shortly after the invasion of Ukraine via Moscow on February 24.

Waving Georgian, Ukrainian and European flags, around 60,000 protesters gathered outside the Georgian parliament on Monday evening for the “March for Europe”.

Many held placards reading “We are Europe” as the EU anthem, Ode to Joy, was performed at the protest.

The rally was initiated by the Black Sea nation’s leading pro-democracy groups and backed by all opposition parties to “demonstrate the Georgian people’s commitment to their European choice and Western values”.

“Europe is a historic choice and an aspiration of Georgians, for which all generations have made sacrifices,” rally organizers said on Facebook.

Ahead of the rally, Georgian President Salome Zurabishvili said in a televised speech: “We must mobilize on this historic day for our country. Our message is that we want a European Georgia.”

One of the protesters, 47-year-old writer Malkhaz Kharbedia, said “every Georgian must take personal responsibility for our European hope to come true.”

“We took to the streets today because the time has come to rely only on ourselves, not on others, the time of our personal responsibility, our efforts, our unwavering will, our perseverance”, he told AFP.

Another protester, biologist Lili Nemsadze, 68, said: “Denying Georgia EU candidate status will mean that we will find ourselves in Russia’s sphere of influence.

Russian President Vladimir “Putin will interpret this as a green light to invade Georgia again.”

Georgia’s bid for EU and NATO membership – enshrined in the country’s constitution – has long angered the Kremlin and tensions peaked with Russia’s 2008 invasion of Georgia .

“The door is wide open,” she said, adding, “The sooner you deliver, the sooner there will be progress.”

Georgia’s ruling party, Georgian Dream, said at the time that it “regrets” that the country was not recommended as a candidate along with Ukraine and Moldova, saying that “by all measurable parameters ( compliance with EU standards), Georgia is ahead of both Ukraine and Moldova.”

Prime Minister Irakli Garibashvili on Friday hailed “the historic decision to give Georgia a European perspective”.

“We will work with Brussels to implement all requirements and achieve candidate status.”

The Georgian Dream government has come under increasing international criticism over a perceived rollback of democracy, which has seriously damaged Tbilisi’s relations with Brussels.

The European Commission said the conditions Tbilisi must meet to embark on a path to formal membership include an end to political polarization, progress on media freedom, judicial and electoral reforms as well as ” deoligarchization”.

Georgian Dream is controlled by its powerful oligarch Bidzina Ivanishvili, who is widely believed to be in charge in Georgia despite having no formal political role.

Earlier this month, the European Parliament passed a non-binding resolution, calling on the EU to impose personal sanctions against Ivanishvili.

Ukraine, Georgia and Moldova have signed Association Agreements with the EU designed to bring them closer together economically and politically.

The agreements also include free trade agreements between the countries and the EU as well as visa-free travel for its nationals for a short stay in the Schengen area.

But they give no guarantee of eventual membership.