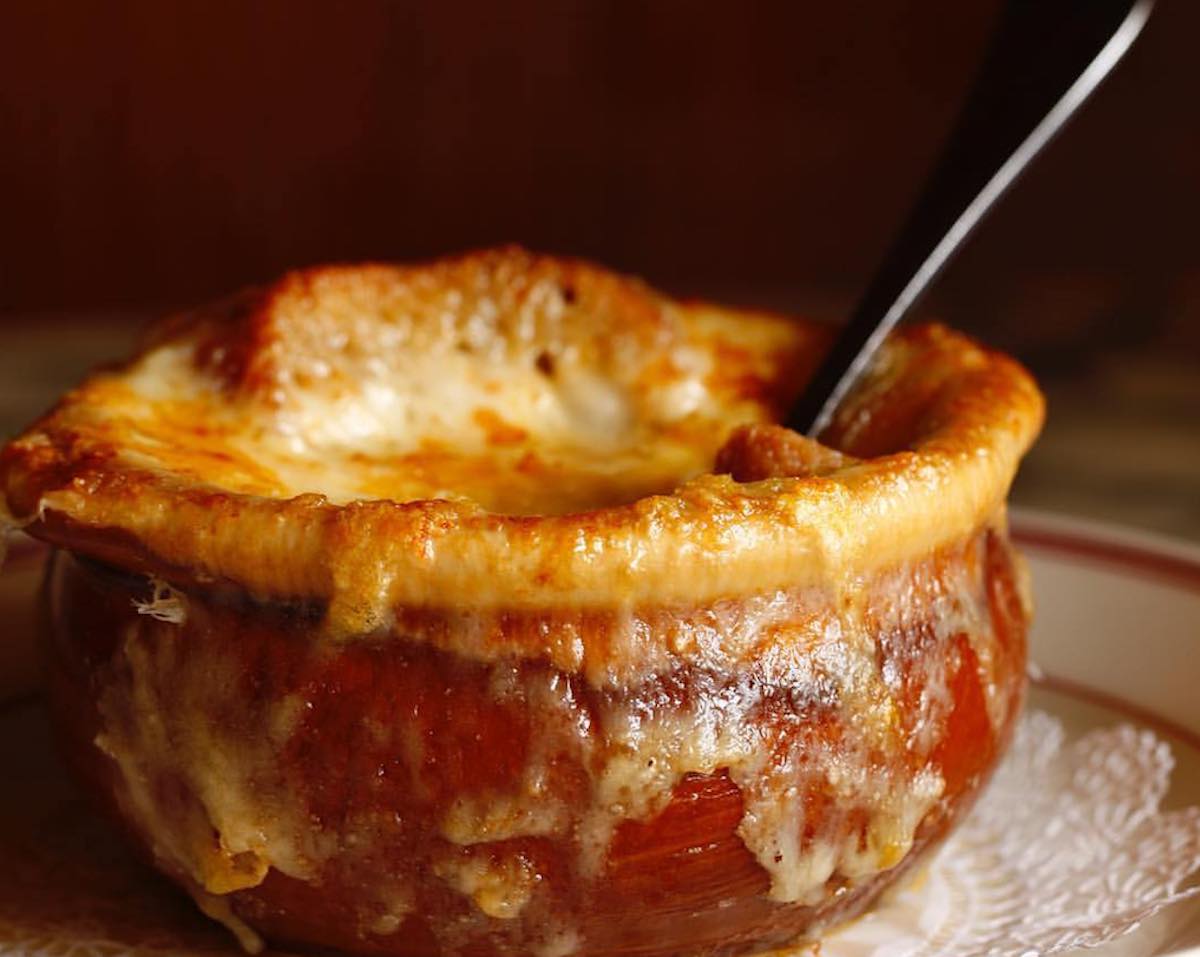 Is there a better soup than French onion? It’s less like a soup and more like a bowl of melted cheese, croutons and caramelized onions with just the right amount of broth, so in our opinion, no. And since there are a lot of similarities in soups, here’s a bowl for all French onion cravings.

The ultra nerdy: Le Diplomate
1601 14th St., NW
The Dip’s French Onion Soup doesn’t skimp on the cheese, which is heaped onto slices of the brewery’s delicious homemade baguette and grilled until bubbly. You won’t see the robust onion broth on arrival, but it’s hiding underneath all that amazing melted cheese.

The classic: Friendly
801 West St. W
Let a French chef like Cédric Maupillier perfect French Onion Soup. The classic bowls, rich in caramelized onions and white wine and served with a relatively small amount of Gruyère cheese, are a must at brunch or dinner at Shaw’s Brasserie.

The classic (with a little twist): Central
1001 Pennsylvania Avenue, NW
Some things haven’t changed on Central’s menu in the last 13 years, even though the place now has a new look and a new chef. That’s true for onion soup: a robust classic with beef broth and caramelized onions, made slightly spicier with the addition of provolone cheese.

Vegetarian: Primrose
3000 12th St., NE
You won’t miss the beef broth in Primrose’s Vegetarian Riff. An earthy, rich liquid gets its flavor from deeply caramelized kombu, mushrooms and onions. Sorry, vegans, the gooey topping of Gruyere and Emmentaler cheeses is here to stay.

The soup and fire combo: La Chaumière
2813 M St. NW
Is there anything better than diving into a cauldron of soup next to a warming fire? The winter dream is a reality in this Georgetown mainstay, which takes its classics seriously. Lyonnaise gratin traditionally takes on a rich twist with the addition of egg yolks and a hint of port.

Soup with a view: City Park
8296 Glass Alley, Fairfax
When it’s not absolutely cold (remember back then?), we love to cozy up to a bowl of French onions on the swanky rooftop wine bar of this Mosaic District brasserie. Good news: you can still enjoy Chef Brendan L’Etoile’s classic indoors, even on the coldest days when al fresco isn’t an option. Note that the equally charming French brothers Cafe Colline in Arlington and Chez Billy Sud in Georgetown also offer the soup.

The new soup in town! duck duck goose
2100 P Street, NW
Chef Ashish Alfred’s brand new French brasserie, a romantic Dupont Circle spot with warm brick walls and flickering candles, is no carbon copy of its sister establishments in Bethesda and Baltimore. One thing all three have in common: you guessed it, sushi! We’re kidding, it’s a really delicious onion soup. Pair it with equally hot dishes like duck confit.

Anna Spiegel covers the restaurant and bar scene in her native DC. Before joining Washingtonian in 2010, she completed the MFA program at the French Culinary Institute and Columbia University in New York, and held various cooking and writing positions in New York and St. John, in the US Virgin Islands.

Better days are coming for travel, as EU countries consider treating COVID-19 like the flu