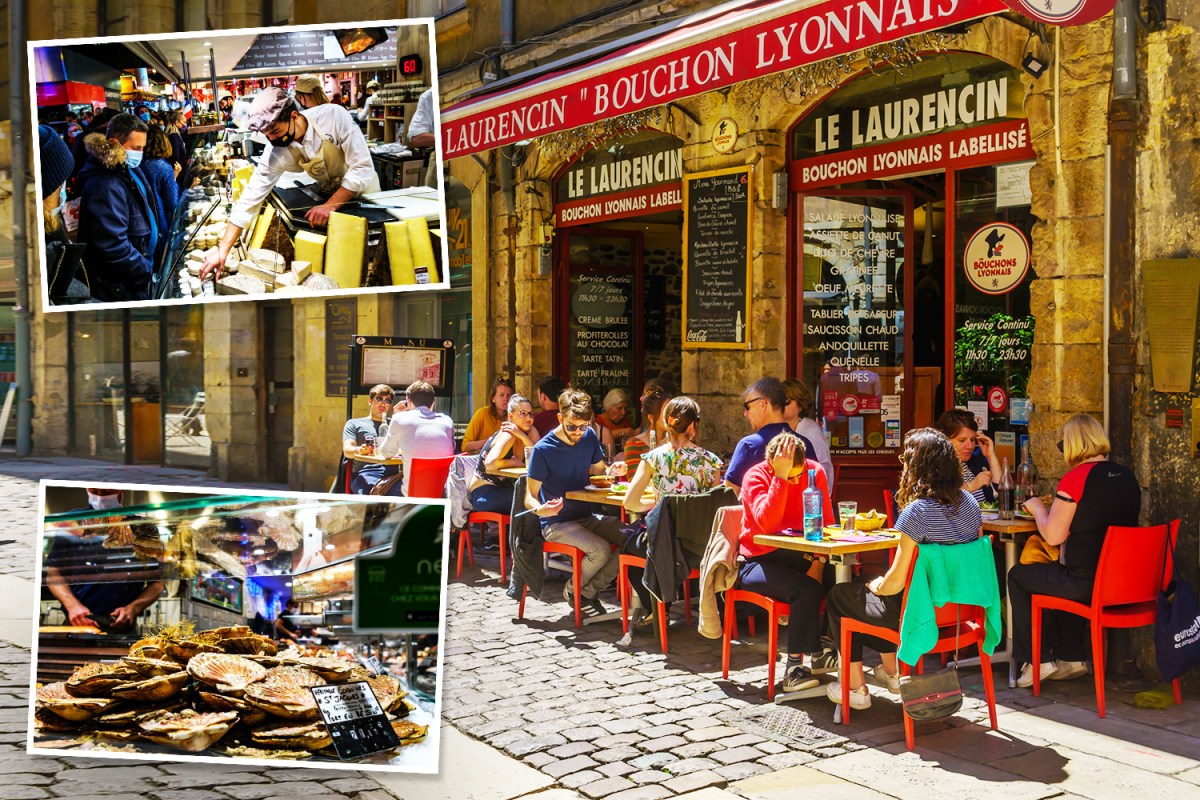 LYON is the gastronomic capital of a country obsessed with gastronomy.

But there is so much more than food to explore in its evocative old town. It has more than 2000 years of history to discover as well as fantastic shops and unusual museums.

WHY SHOULD I LEAVE? From the cobblestones of its historic old town to the panoramic panoramic views from the Fourvière hill over its two rivers, France’s third largest city is a striking and surprising destination for any first-time visitor.

With its incredible food, ancient Roman ruins and vibrant nightlife, this is an ideal weekend getaway.

And since the French Riviera is less than two hours by train, it’s also the ideal stopover for those considering a trip to the south.

ARE THESE STREETS MADE FOR WALKING? With two majestic rivers flowing through the city center – the grand Rhône and the smaller Saône – Lyon is a particularly picturesque place to see on foot.

The cobbled paths and mysterious passages of Vieux Lyon, top right, or Vieux Lyon, are often very popular with tourists but are also unique and perfect for photo ops.

Head to the vast Parc de la Tête d’Or for a leisurely stroll. Stretching over nearly 300 hectares, France’s largest urban park is an oasis of calm that also contains a boating lake, botanical gardens and even a zoo.

While the original hillside district of Croix-Rousse will give your legs a good workout, its charming cafes, winding streets and colorful public art are worth a visit.

SOMETHING FOR THE BUCKET LIST? Take the funicular to the top of Fourvière hill and admire the stunning views over the town and beyond.

On a clear day, the rocky peaks of the Alps are visible in the distance.

While on the hill, don’t forget to explore the absurdly adorned Basilica of Notre-Dame de Fourvière before walking five minutes to the Roman amphitheatres, which date from around 15 BC.

Find out where the films started in the elegant Musée Lumière. The museum tells the story of the Lumière brothers, pioneers of cinema and inventors of cinematography.

And no trip to France would be complete without a stroll through a bustling market. Lose yourself in the assortment of tasty meats, cheeses and vegetables at Marché Saint-Antoine, which runs along the banks of the Saône each week.

WHERE SHOULD I EAT? Lyon being the gastronomic capital of France, visitors are spoiled for choice when it comes to gastronomy.

For a diverse introduction, head to the bustling Les Halles de Lyon Paul Bocuse food market and sample as much as you can at the many stalls and bars.

Local classics include the andouillette, the Lyonnaise salad and the sweet praline tart.

The picturesque Rue Merciere in the Presqu’île district of the city has a canopy collection of fine restaurants where you can dine al fresco on authentic French cuisine in the evening.

If you want to push the boat, Lyon has 20 Michelin-starred restaurants, including La Mère Brazier.

But if you prefer to keep it simple, you can’t go wrong buying a fresh baguette, cheese and ham to go with it and sitting on the steps by the Rhône in the sun.

Train it from London St Pancras to Lyon via Paris or Lille with prices from £ 170 round trip.

Or fly easyJet from Luton with fares from £ 70 round trip.

Rooms at the Mercure Lyon Center Plaza Republique start at £ 82 per night.

I WANT TO DRINK : Stylish bars spill out into the cobbled streets of Vieux Lyon, so order a glass of local Beaujolais and watch the world go by.

Les Berthom is a great little pub to enjoy the good weather outside with a few beers, while the Venetian-inspired bar Le Florian offers a wide range of mouthwatering cocktails.

Want a more unique experience? The Sirius is a boat bar permanently moored on the Rhône which is a great place to party on weekends with a lively atmosphere.

WHERE SHOULD I STAY? For good value for money accommodation in the heart of the city, the 4H Mercure Plaza Republique ticks all the boxes. The rooms are compact but have all the necessary amenities, including free water and wifi.

Downstairs, the small bar and the terrace allow you to refuel after a long day of exploring the city.

And with so many amazing places within walking distance, including the many restaurants in the Old Town and the pedestrianized Carré d’Or shopping district, it’s a great base.